A further question can now be added to the ranks of world changing moments… Where were you when the 6th Balleggs was won?

For most, the response to that question would just be “Don’t know” or “Don’t care”, but for eleven people, eleven lucky few, they can say “I was there…”

Good weather and a strong tailwind saw a record turnout at this seasons event (0.00000015% of the world’s population!!!), which included a new face Hary Crowdah. Spirits started high, and with the timely precision of an Italian Military outfit, the event was under way at about 1pm ish after the necessary coffee and brunch breaks...

Due the mathematically wack entrance numbers, 6 players started their campaign in the Round-of-16 stage. First batters up were Ashley Davies and newcomer Harry Crowder, Davies serving an immediate emotional gut punch to his counterpart and advancing onwards to the quarters 3-0. Next up was Rog Jones and Digby Taylor, the third time these two have met in the opening stages of the tournament, a match now being dubbed "El Classico". Limp wristed slaps were traded in both directions with Taylor eventually advancing 3-2. Final pairing drawing the crowds were prior winners Will Jones and Jamie Manson. Jones literally having a shaky start left the door open for Manson to swan into the quarter final 3-0.

Enter Stage left: the remaining rabble. The quarter finals started with fresh legged Alex Bournat taking on Ashley Davies, Bournat immediately slicing into Davies with a win on pool before losing 3-1. Potentially weary from his first round 5 setter with R Jones, Digby Taylor was next opposing Jack Bowden. Perhaps dues to his opponents fatigue, or maybe just a pure desire for destruction, Bowden went on to a 3-0 win and a spot in the semis against Davies. Seeing the bloodied corpses of fallen challengers on the floor, Max Barber and Will Manson were next to gingerly step up in the first quarter final on the other side of the draw having mutually avoided a round-of-16 tie. Both men considered pool specialists saw the result come down to the darts, with Barber edging into the semis with a 3-1 win. The final quarter saw Jamie Manson, still revelling in his opening victory against a tough opponent, take on Mr Knob-of-the-year himself, Harley Cox-Hynd. Some serious coaching helped Cox-Hynd wobble the past champion with numerous games coming to a black ball game and double-2. Manson eventually scraped through to the next round with 3-1 victory and a slight limp in his step.

A personal tournament best for Barber placed him eager eyed in the semis against J Manson, a man who has had many a semi. Cries of “Kill him Max” slowly petered out as J Manson advanced unscathed into the final with a 4-0 victory. The second semi saw the on-form Davies taking on Bowden, the latter losing the toss forcing him to immediately challenge on the Davies killing fields that is the dart board. As the wind changed outside, and most of the people of planet of Earth continued their day, rumours started to spread that Bowden had taken the first darts game to go one up in the semi-final. This was officially confimred and shocked silence hovered like a heavy fog in the shed as the two moved to the pool table. “Could this be the end of old Ashley” started to be whispered amongst the crowd. The answer was no, Davies went on to win 4-1 to set up a final reminiscent of the 2014 winter Balleggs showdown.

Donning his Balleggs battle armour of a strange hat, Jamie Manson stepped up to take on the form of Ashley Davies. Only the second time these two have met, Manson knew the importance of winning the toss and placing Davies on his slightly weaker pool foot. This was not achieved, and the two finalists picked up darts to open the match. A strange drop in accuracy saw Manson break serve and take the first garts game, before immediately being broken back on the pool table to take it to 1-1. The emotional battering of an immediate break back, as well as the increasing confidence of Davies from some re-summoned form, led to the gradual un-ravelling of the Manson pool and darts game. Perhaps it was beauty that killed the beast, as Davies went on to serve one of the biggest drubbings in a final with a comfortable 5-1 win.

A deserved win for Davies, who only saw a check in stride on three occasions, comfortably lifting the trophy for the second time after duly thanking fellow competitors for trying. The most noted point of the day was the clear and marked form improvement from all players, most notably of which was Cox-Hynd who received the Players Player award from the winner.

It was one small step for Davies, but one giant leap for the Balleggs.

Coach of the Year: Jamie Manson

Knob of the year: Harry Crowder 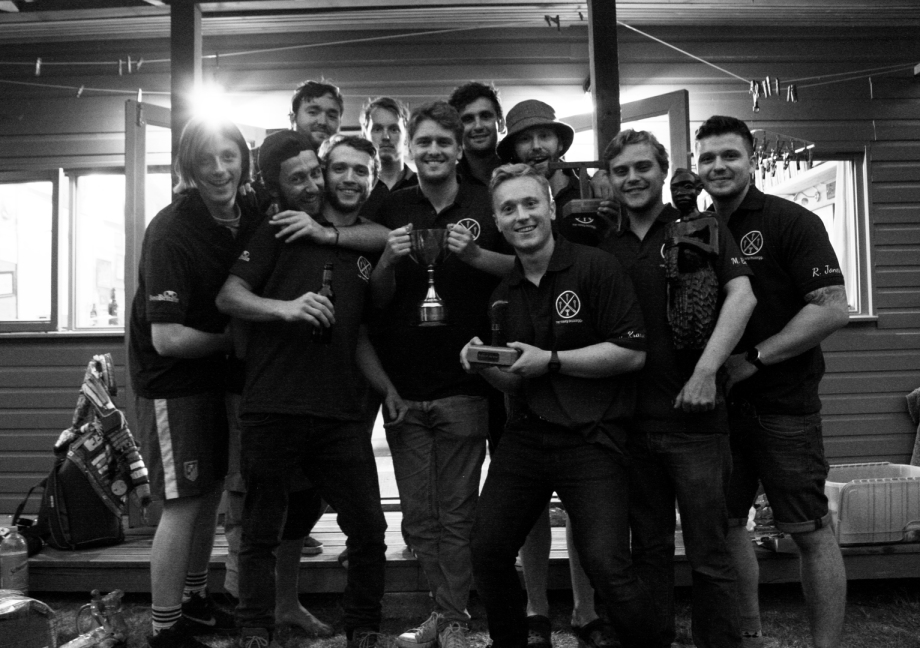