Never before have so many, drank so much, so few hours before competing in a major sporting event, and what happened in that shed over the next 10 hours would go on to change the very course of the Balleggs forever.

Tales of the human body enduring incredible hardship have occasionally emerged over the centuries. Stories of people walking back home from Siberian prison camps through the height of Russian winters, or spending weeks lost in deserts with no food or water. Now, those that survived the 7th Balleggs, those lucky few, can say they know how it feels.

Despite the heavy adversity, a record turnout of 14, including two new competitors Lyle Phillips and George Benbridge, were welcomed into the event at a time surprisingly only just past the actual intended start time.

Blood sugar was low, tempers were high, but still 13 of the 14 made it to the Balleggs arena for roll call, with Digby Taylor pulling out pre-event for religious reasons.

After all the necessary pre-event ceremonial guff was completed, all competitors turned their concentration to the draw, with most eyes of curiosity falling on the 2nd side containing three past winners and another prior finalist, and with all the enthusiasm of lambs being led to slaughter, the event was underway.

First batters up were new boy Lyle Phillips taking on the imperial might of Mr Knob-of-the-year himself, Harley Cox-Hynd. With Phillips still shrouded in the mysterious mist of the new unknown, Cox-Hynd was cleanly despatched to the underworld of the tournament with a 3-0 loss. Next up to plate was Harry Crowder and Alex Bournat. Having come close to embarrassing himself on his first Balleggs appearance previously, Crowder was keen to impress, and certainly did so by taking the first darts game. Worried but uninjured, Bournat mercilessly returned fire and advanced to the next round 3-1.

On the other side of the tournament, Will Manson was engaging Jack Bowden in a first round sortie with blows being traded by both assailants. With neither getting the upper hand on the table or dartboard, the deadlock was eventually broke with Bowden advancing 3-2. Next to them, the clash of the willies was well underway with previous winner Will Jones taking on Will Krause. Most spectators dismissed this matchup as a bit of a one sided affair, but interest was initially peaked when a wild battle shriek was heard from the dart board after Krause surprisingly took the first darts game. The past champ strapped back on his big boy pants and proved the Krause victory was a flash in the pan, and Jones shoved him aside with a 3-1 win. The final match of the first round saw a replication of last years final, with 2 time winner Ashley Davies taking on 3 time winner Jamie Manson. With Davies winning the toss, Manson would have to break the fast serve of Ashley darts game. A feat too hard to complete, Davies started his march to the final with a 3-2 win over Manson, proving that rugged good looks and devilishly handsome features are just not enough to beat Davies on the dart board.

The odd number starting, and the pull out of Taylor, saw byes into the quarter final for three players. The first of which was pool specialist Max Barber taking on Phillips after his clean win over Cox-Hynd, with Barber taking an unexpected upper hand with a victory with darts, still not to be undeterred, Phillips went on to take a 3-1 win with two further victories on the pool table. Next bye (secshual) up was Rob Jones who was well aware of the need to stop to human steam roller Alex Bournat gathering too much momentum. An early mistake by Jones saw him getting confused with his right and left hands, leaving the door ajar just enough for Bournat to cleave his way through with another 3-1 win.

The third and final bye was fellow new kid George Benbridge, sporting an erroneously labelled piece of apparel. Locking horns with prior finalist Bowden, still smarting after his close call with W Manson in the first round, Benbrdige wandered into the ring with youthful intrigue. Despite the fact Benbridge was celebrating his 25th Birthday on that very day, Bowden (who apparently doesn’t really give a shit about anything) ruthlessly swiped him aside with a 3-1 win. The last quarter was another eagerly anticipated affair, with many expecting the lack of sleep of both members Jones and Davies to result in the first Ballegg draw. With Davies winning the toss again and unsurprisingly going for darts first, will Jones fell heroically after two wins on the pool table with a 3-2 loss.

With Phillips standing to meet Bournat in the first semi-final with arms outstretched like the scene from dirty dancing where Patrick Swayze catches Jennifer Grey and lifts her above his head, Bournat came running in to the match with full momentum. Phillips took the charge into his embrace, and turned it over into a clean 4-0 drubbing, advancing Phillips into the final relatively unscathed. On the other side of the table in semi-final two, both competitors Bowden and Davies were starting to feel the effects of the close calls earlier in the tournament. Perhaps it was Bowdens trouser problems the night before leading to sever fatigue which allowed Davies to stroll into the final 4-0 with some new-found wind in his sails.

The crowd was split, no one knew who they wanted to win, new boy Phillips or old hand Davies. So like an election night special, the final got underway with Davies again winning the toss and opting for his beloved darts. The first darts were close, with both competitors getting down to doubles. Davies hit first, slotting his tiny dart straight into the intended double 12. The next pool and darts games reciprocated the close call of the first, but each also reflecting the outcome, and with the final reaching 4-0 Davies, most were sure this was a climb too steep for any man as the 5th game got started. It went to wire again, but again Davies found the double first and with just enough energy to raise his arms, the celebration ritual was rushed through. Commendations were made to everyone for surviving, notably Harry Crowder for completely out performing his previous appearance, as well as Lyle Phillips for advancing so deep into the tournament as a rookie.

I’d normally like to finish this battle report with a pithy remark, ideally linking back to the beginning to take the reader on a satisfying full circle tour of the event, but my curry’s here now so my mind has drifted.

Coach of the Year: Will Manson

Knob of the year: Digby Taylor 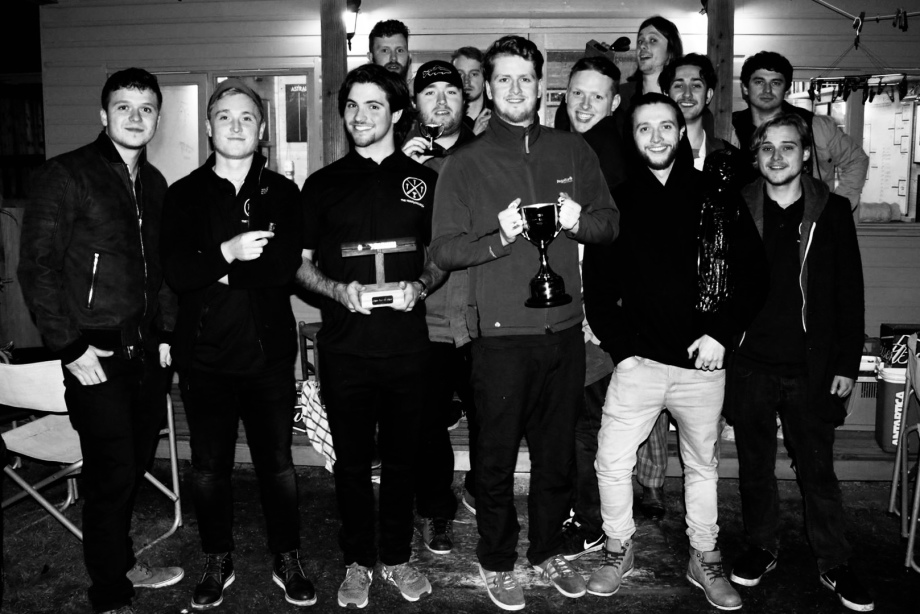