As the players made their way through the crosstown traffic, a purple haze descended on the sacred goat shed and the wind cried Mary, Hey Joe! For it was time, the day had come that the metal of these brave competitors would be tested yet again. Who would cry, who would die, and who would just get bored shitless? Here we go…

Sad news swept the camp like a foul smell as word was passed around that a few of the athletes wouldn’t be competing due to work, international, or cleanliness duties. But it wasn’t all doom and gloom as the numbers were bolstered by a new competitor, James George, bringing the tally to 12. This introduction of new blood sparked a ravenous scene like the one from Lord of the Rings the Two Towers, when the orc Mauhur wants to eat the Hobbits but he’s not allowed and then Ugluk shouts "Looks like meat's back on the menu, boys!" and they all tear each other apart, well that’s almost exactly what happened, but with more smoke grenades… and just like that the tournament spluttered into ignition.

Rob Jones was first to enter the ring against last year’s winner, Ashley Davies. Jones was well aware of the magnitude of the task at hand and built a full head of steam in the form of a head-first running jump to try to tackle Davies, this was swatted aside as Davies strolled on 2-0. On the same side of the tournament, Jamie Manson was wrestling with the Dread-naught, Harley Cox-Hynd. Cox-Hynd took him close on the pool and the darts, but Manson followed Davies into the Quarter Finals 2-0. Meanwhile on the other side of the tournament, the games were going much closer, with all eyeing a possible spot in the final. Both matches trading blows quite evenly as Max Barber played Alex Bournat, and Jack Bowden tickled George Benbridge, both coming down to a deciding match, it was almost exciting. But with all four engaged in some sort of hyper-sexual Mexican standoff, it was Bournat and Benbridge who shot their load first, both advancing 2-1.

All eyes swivelled to the first of the quarter finals, as Davies looked to take on the man who didn’t make it past the opening ceremony of the previous event, Digby Taylor. Was this a tactical rest that would see Taylor one-up the reigning champ? The answer was no, Davies walked through again 2-0. Next to them, a closer match was being played, as a replication of 2016 (W) final was underway with Manson going snoz-to-snoz with first round bye, Will Jones. Manson won the toss as was conscious of the Jones track record on the pool table so positioned himself in front of the board de dart. It was a tactic that paid off as Manson took the first darts, followed by the second, sending Jones kicking and screaming, but mainly screaming, into the underworld of the tournament.

Elsewhere, seemingly unphased by the oddly overdramatic and ritualised opening ceremony, new blood James George strolled into the ring for the first time sporting a look of childish innocence yet to be molested by the strong arm of M Barber. Like a crowd studying a prototype self-driving car, everyone stood back from the match with cautious intrigue. The good news is no one was run over, but J. George showed himself as a potential force to be reckoned with, beating Barber 2-1 with two darts victories. On the same side of the draw, untested pool specialist W. Manson was taking on now veteran, Benbridge. It was a short lived affair as Benbridge advanced with a 2-0 victory.

The remaining competitors were well aware they were entering the business end of the tournament as fatigue started to ravage bodies like a virus and elite athlete cramps settled in. On one side of the tournament, virgin semi finalists J George and G Benbridge eyed each other up, whilst in the other semi a rematch of the 2014 (W) final was being set up between the two self proclaimed titans of industry, A Davies and J Manson, both with three Balleggs trophy wins each under their belts. Whether he was born with an affinity to coins or what, we don’t know, but Davies won the toss for the eighth time in a row. Unsurprisingly he selected darts to try and get an early tally against his name, but eyebrows where raised a hushed mew bounced around the spectators when his breakfast darts didn’t meet their target and Manson caught a fat ton. Amazingly this odd switch of form continued and Manson closed out the darts match with a surprising break of serve. With his guard lowered, Davies struck back at Manson and immediately broke back with a win on the pool. Blows were traded equally again on the 3rd and 4th games, bringing the match to a tense 2-2, which was quickly dissipated with a long wait until the decider. Manson elected to spend this time meditating and possibly ascending to a higher plane of thought through the medium of Carlsberg, whilst Davies patience cracked and offered to change the decider to the currently open pool table. Manson gladly accepted the offer, and although he didn’t quite take Davies to the cleaners, he was certainly thinking about laundry as Manson advanced to his 7th final 3-2.

Semi final 2, the clash of the Georges. In a unconcerning turn of events, George took the toss and walked straight the dartsboard. His darting prowess continued and he took the 1st game whilst still wearing a look of “what’s going on”. Benbridge, perhaps with a lust for silverware, or perhaps accidently, whipped back at George on the pool table to level the score. Unphased by this, George turned his effort up to 11 and replied with back to back wins on the darts and pool, meaning a new boy was in the final for the second year in a row.

Right, so, there we were, the final had been reached and the end was in sight, relief hadn’t quite set in yet but attention was certainly being drawn away to the world cup raging in the back ground. Manson had been here before, George hadn’t, would experience pay off or would the young buck beat the old man potentially in the twilight of his Balleggs career? And just like that, it was off like a rocket, George won the toss and went for his preferred darts. Unphased, and looking incredibly handsome by all accounts, Manson won the darts, followed by a victory on the pool table. George was staring right down the barrel of a white wash and was determined to not go down without a fight [Editor’s Note. I wanted to put in some pun here taking the barrel and white wash metaphor onto something to do with shafts and semen, but couldn’t get it to piece together, so there’s the ingredients anyway], so with his big boy pants firmly pulled all the way up, George stepped back into the dart arena. It paid off, he sliced back with a dart victory and someone may have gasped “Is a come back on the cards!?”, but that may have been from the TV, not sure. There was elation, there was confusion, and there a lot of shouting as the competitors made their way to the pool table, and it was there, on this already blood stained battlefield, where something extraordinary happened.

The break was like any other, but maybe more so. Balls where scattered nicely and Manson followed up with 3 pots in succession. George visited the table and missed his pot, Manson came back and put another 3 balls in, leaving 1 red and the black remaining, whilst George still had all seven on the table. It was another miss from George, and more miraculously Manson was left with another straight pot with the black in the open. With elite level sportsman ball control he left himself with an easy pot to claim the first ever Balleggs 7 ball, and the sweet £47 7Ball/180 pot. Although there was still a darts game left, it was over, the dream was shattered, and Manson closed out with the momentum, winning 4-1 and claimig his 4th Balleggs trophy.

So that was that, did you enjoy it kids? No? Me neither.

And to bring it the customary full circle… Stone Free!

Coach of the year: James George

Knob of the year: Rob Jones 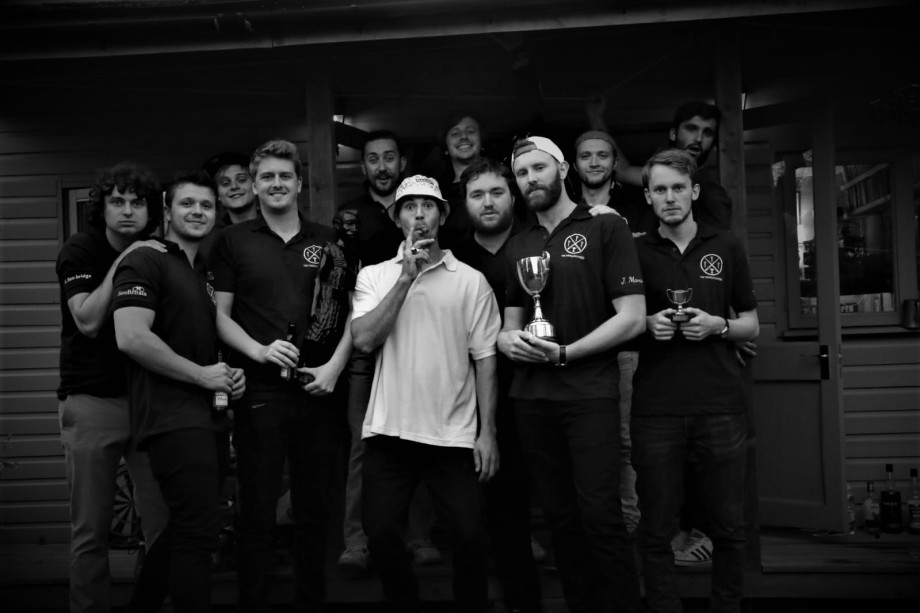