Wilkommen back slags and slagess’s to the Balleggs, the Eggs De Ball, the greatest show on earth.

Our tale begins not with a shitty flashback scene like most stories these days, but exactly where it should; the beginning. It was a delayed start to the Retrospective 2020 summer Leggs, which caused most competitors to turn up late asking “What deyisit?”, but the show got on the road eventually just like normal. With singing, clapping and a small shout, we were underway.

Jones was feeling good, he’d repeatably told the crowd that he’d been practising so Manson was slightly hesitant when entering the ring. These two had met multiple times in the past, with Manson usually getting the upper hand, but this time it could be different, this was an Autumn balleggs where anything could happen.

Jones won the toss and elected for his stronger pool, even though “he’s really good at darts as well”. Manson preferred this also but it paid off for Jones as he took the first blood of the tournament with a pool win over Manson. This was followed up with a cool win on the dart board to give Manson a swift exit from the tournament. Not what he deserved as Manson was clearly the better competitor, but he was obviously tired/injured from spending all morning clearing the Balleggs Stadium, so it was definitely an excusable loss.

J. Bowden vs. A. Bournat

Seeing these two side by side you’d think it was father and son, or even that weird thing from the original Mad Max’s with the little goblin sat on the big blokes shoulder acting as the brains of the operation. But is this an accurate representation of the two players, only time would tell, shrug emoji.

Bowden won the toss and announced he didn’t feel confident with either option. This was a lad or was capable of reaching the final, but also coming last, and everything in between. He went for pool knowing that Bournat hated the table, but with his coach on his shoulder Bournat scraped through to a rare pool win. He’d broken serve. Bowden, knowing it was now or never, and with Bournat taking his confidence to his preferred dart board, stood up straight and prepared for a good old fashioned rimming. But it wasn’t to be, Bowden used his lucky coin and pulled a medium-to-stellar darts performance out of the hat to hit back at Bournat 1-1, advantage Bowden once more. Bournat was shaken, he was worried, and was already starting to get upset at the prospect of another season in the Elliot. He cried a little, getting his last remining human emotion out before going full robot mode and doing exactly what his coach asked. A trick that worked the first time, and it worked again, Bournat did what he thought was impossible and won back to back pool matches, sending Bowden back into the hills to compete in the under belly of the tournament.

This was a match up that had the mouths of crowd watering. Two titans of the black spoon and knob of the year arena were about to go head to head, if there wasn’t going to be blood, there’d be some sort bodily fluid spilt, possibly piss.

Jones was off to a flyer as he very cleverly called the toss of the coin correctly. He was clearly proud of his achievement as he strolled into the shed with a smug grin across his face. Although it was feat short lived, he chose wisely and selected pool for their opener as he knew Cox-Hynd could occasionally oddly turn up for darts, but it wasn’t to be as Cox-Hynd took the opener with a quick affair on the pool table. Jones was confused, possibly petrified, Cox-Hynd had started drinking his potions and not much could stop him after that. Although spells are forbidden, potions are just frowned upon, which was a loop hole Cox-Hynd exploited to his full advantage as he followed up his pool win with victory on the dart board advancing into the semis with a solid 2-0 land slide.

A. Davies vs M. Barber

Imagine if you can two brothers, who’d probably get on well in 1940s Germany, and you suspect one of them got banged on the head as a child and spent most of their life outside. That’s exactly what this pairing looked like side by side. But in reality they were far from brothers, they were sworn enemies.

Davies was a 5 time champion, and Barber knew if he was going to have any hope he would have to win the toss and then beat Davies twice on the pool table. The stats heavily favoured Davies on the dart board but it would be a 50/50 tie on the pool table. Barber won the toss and correctly selected pool first, he was in with a chance to cause a major upset here and he knew it. He was standing ready, pool cue in one hand, warm beer in the other. It was a formidable sight. But Davies had seen it all before, he’d been down the stretch with every competitor, if you get what I mean, and wasn’t fazed by Barbers show of force. Davies did what he had to and stopped the upset before it started, beating Barber in the opener before following it up with a concise win on the dart board for another 2-0 advancement into the semis.

My semi…? No no that’s your semi

W. Jones vs A. Bournat

Jones, along with everyone else, was already thinking about a Davies vs Jones final after the absolutely shocking defeat of Manson in the first round. To Jones, Bournat was just another obstacle that he was determined to get past without depleting too many of his calorie supplies.

The odds were in the favour of Jones, Bournat knew this but still made the odd decision of going for pool first against the advice of his coach. The thought process being Jones could lose a pool match in a second with an unlucky shot, but not on the dart board. It was a defensive play from Bournat, but something that immediately paid off to give the first shock result of the tournament. Bournat was in the lead against ex-champion Jones and he was wearing a stare that made him look half focused, half mental. This match up now had the attention of the rest of the shed.

Jones wasn’t having any of it though, a fluke he thought to himself, Bournat had never made it past the semis before, it was still Jones’ to lose. But Bournat was a darter, a twice Schmiechal winner, he’d smelt blood and was ready to go in for the kill. Bournat proved this day that you don’t win back to back Schmiechals with just good looks, his monotony on the dart board eroded his score down and he slotted his double home to rock Jones to the core. Jones was on the ropes, but he wasn’t done yet, although he knew it was three match points to Bournat. He proved he still had some spunk in the tank as he hit back with a pool win, taking the contest to 2-1 in an attempt to kickstart an epic comeback.

Bournat settled his nerves and hesitantly walked over to the dart board, he knew he was one win away from the final, from uncharted glory. Jones was fighting for survival, he’d realised at this point that he may have not given the semi final enough respect, and was focused entirely on the final. It went down the stretch on the final darts, tit for tat, and it came to both competitors on their doubles. Bournat got their first, double 20 required, and whilst Jones fiddled with his flights, confident of another visit, Bournat thumped home a double tops. He’d done it. Done the impossible, beaten a man no one thought he could, projecting himself into the final for the very first time.

H. Cox-Hynd vs A. Davies

In 1983, the United States of America invaded the small island country of Grenada. They landed on a Tuesday and by the Thursday the nation was under full US control. That was a similar situation to this match up, the man who has come last more times that any other was standing up to the man who’d won more times than any. It was a David vs Goliath, a US vs Grenada, but it was clear the population were cheering on their Grenadian comrade. Could he do the unthinkable and knock out Davies. It had just happened to Jones, and the crowd were hoping to see another upset.

Davies won the toss and just like that Cox-Hynds hopes and dreams dissipated. The contest was over before it had begun. Of course Davies selected his favourite darts to open, and easily cruised through to a 1-0 lead. It was all going exactly to plan for the Blondeman. Cox-Hynd, refusing to be completely bent over, surprisingly slapped back with a win on the pool table, shocking everyone including himself, levelling the tie, and planting a small seed of comeback doubt into the head brain of Davies.

Seeds, like most living things, need watering and nurturing. They need help to grow. Cox-Hynd however, possibly due to his hatred of gardeners, did not encourage this growth, instead he stamped and shit all over it. The comeback did not take roots, Davies went on to dominate the next darts match before a concise win on the pool, propelling himself to yet another final.

A. Bournat vs A. Davies

A couple of interesting stats for ye about this match up. Bournat has never reached the final of any Balleggs. Davies on the other hand, has been in five, and never lost a final when reached. Their head to results are equally grim reading for Bournat; of the four encounters, Davies has won each one. The odds were not in Bournats favour, he knew it, but he was happy to just be there really.

It was the perfect start for Davies to get his run at a 6th Balleggs title underway, he won the toss (again) and without too much hesitation went for darts up first. Although the stats were weighted heavily in his favour, Davies knew that it wasn’t going to be an open and shut case. Bournat was the player on form, he’d already caused a major upset in knocking out Jones, and he was ready. Ish.

Unlike most fairy tales however, the underdog did not get his way. Perhaps it was fatigue creeping in to Bournats weary legs, or maybe all his mental capacity had been used in the semis, but things unravelled very quickly for him.

Davies won the first darts. Followed by the first pool, and then the second darts match came shortly after to make it 3-0. It was championship point Davies. Bournat was standing at the bottom the mountain and he did what most sane people would have done in that situation, he threw down his walking poles and fucked it off. It was an unassailable task at this point and he decided to save himself for next year. Davies won the final pool without too much duress, propelling him to 3 back to back balleggs wins and 6 wins overall.

Impressive? I’ll let you lot decide, but well done to Davies, you don’t win the Balleggs with a gentle smile and soft hands, you need dirty fingernails and questionable facial hair also.

And just like that it was over. The were a number of casualties, a couple were passed out, one or two had gone full cross eyed, but all were still breathing and there was no sick so quite a successful tournament really.

The presentation ceremony was absolutely lovely as well.

That’s about it really, thanks for coming.

For totally outperforming his station and making his first final, A. Bournat was awarded the Players player award.

Coach of the Year: J. Bowden

Knob of the year: J. Bowden 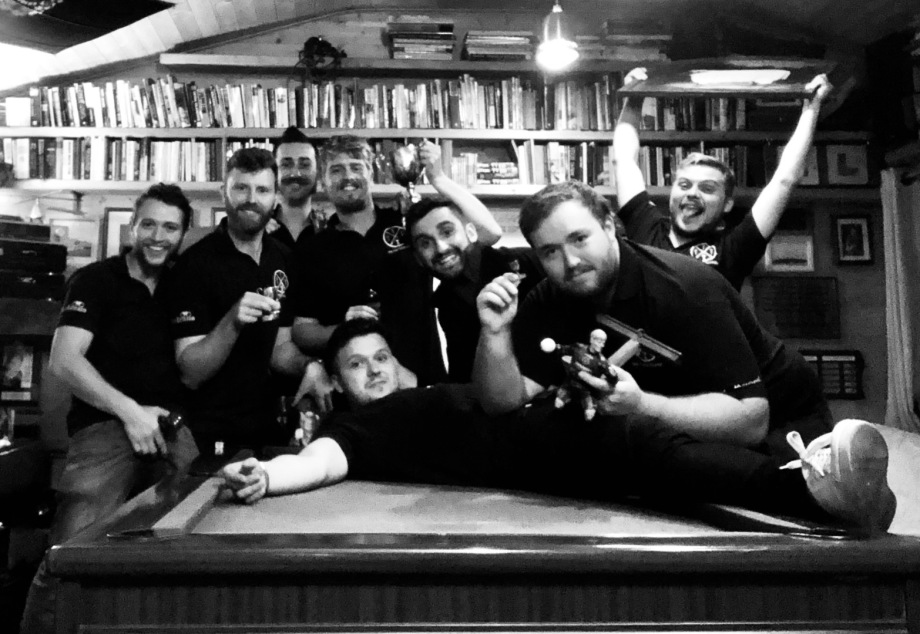