Hiya and welcome back to the delayed 2020 Winter Solstice, pushed back 7 months because some kid in China ate a bat… who would have thought it.

As you’d expect, the change of season confused the men of the Balleggs, and all competitors turned up in puffer jackets and thermals, which were quickly discarded and replaced with skin tight Balleggs polo shirts. It was like Baywatch meats 300, it was glorious.

Without much fucking about, surprisingly, the Balleggs got underway without a delay and crucially without any injuries which is always a good start. J. Manson was reprising his role as lead anthem singer after accidently showing his anus during the previous balleggs anthem. Some would say he just like the attention.

There was a shout, a relatively short clap, and some nob blowing a horn, and just like that the Balleggs had begun.

These two had met before, many times. They knew each other like a jockey knows a horse and Bowden knew his win record against the older Manson was not in his favour. However, that being said this was replica of last seasons opener in which Bowden shocked Manson with a 2-0 win.

Bowden won the toss and already had a look on his face like he couldn’t be bothered, but he summoned some inner Lucozade strength and lifted himself from the outdoor sofa. Darts would be the venue for the opening event. Manson one, although it was close, scarily close, and he realised this wasn’t going to be the usual walkover opening round. Bowden was on form and actually trying this year which made him dangerous. But it wasn’t to be for poor Bowden, Manson followed up his win with another on the pool table, it was a victory, but a narrow one.

Whilst the top match was getting on, these two pool specialists were battling it out. Both having significantly higher pool stats than darts, the toss was unnecessary as pool was a given. Barber grabbed the nearest que, which turned out to be nob, and after a few apologies the 2nd match was underway. Barber got the early upper hand with a pool win, but over on the darts he knew it’d be 50/50. As suspected it went to nearest the bull after a long drawn out process on doubles, which Manson took with a fist pump and look around to a confused Rog.

So it was pool that was going to settle the most evenly tied match of the openers, both men gripped their shafts and locked eyes as they strutted over to the table. There was a bit of this, and a bit of that, balls were pocketed pretty evenly but Manson managed to edge ahead as it got to the business end. He managed to just scrape over the line and sink the black just before Barber, propelling Manson into a rare semi final for him, and jettisoning Barber off into the underworld.

When a bulldozer meets a wrecking ball, it’s hard to decide what’s going to come out on top, but when one of those things has lost more than any one else in the history of the Balleggs, it makes the decision a little easier.

This wasn’t a usual match up, these two hadn’t played each other that many times so each other’s game was unknown. Bournats strength was definitely darts, but Cox-Hynd was a mystery even to himself.

Bournat won the toss a selected darts, he’d been practicing apparently although he’d forgotten his darts. Good start. It didn’t matter however, Cox-Hynd was more concentrated on being a fellow DJ and keeping the tunes pumping, so Bournat easily won the opening game. Cox-Hynd had a chance to level the scores on the table as Bournat was known to hate pool, but the distractions kept coming for Cox-Hynd and he limply bowed out of the tournament to an imperious looking Bournat.

Of all the opening matches, this was the most one-sided. Davies was keen to get his new Balleggs campaign underway after scooping last seasons trophy, whilst Jones was just happy to be there. Spectators (tators) looked on in interest to what they’d be dealing with this year as Davies confidently strolled over to the dartboard to open his account.

It was a shaky start, very shaky, a lot of 26s, but he wasn’t concerned as he kept throwing completely oblivious to his opponent. Jones was relishing the distraction, he’d slipped through completely unnoticed and his cry from the shed made all the other competitors come inside. They thought he’d probably injured himself after seeing the surprised look on both his and Davies face. It was the first shock of the tournament, he’d done the impossible and beaten Davies at darts.

People started to gather as the pool game commenced, this was Jones’ chance to knock Davies out of the tournament and see his name in lights once and for all. But it wasn’t to be, Davies finally got his first win to take the decider to the dart board. He was worried about his darts game, this wasn’t normal at all.

With a heightened state of concentration this time round, Davies managed to scrape through to his first darts win and therefore the match. Jones was gutted, he’d had a shot a glory but had missed, but it was very close to greatest upset in Balleggs history.

Is it the same person? The answer is no, although these two are almost identical, they are actually brothers and can be identified by the fact the one likes maths and the other likes sticky things. The pair had met many times before, with the maths version never managing to get the upper hand, but buoyed by his late win over Barber, W. Manson wasn’t quite smelling blood, but there was definitely a whiff.

The smaller (and therefore less superior?) Manson won the toss and pointed at Pool, it was his only shot. The larger Manson, eager to get his match over and done with, was eyeing a 3-0 drubbing, “think of the juicy stats” he whispered to himself in the corner whilst rubbing a computer.

As we’ve seen before in previous Balleggs, over confidence can be a game wrecker, and J. Manson fell foul of this terrible mistake. W. Manson took the first pool game with a convincing victory. Uh-oh whoops indeed.

Large Manson knew he needed the next game or it would be a long way back, he was expending precious energy that he needed for the final, and the longer the match went on, the more beer that would be consumed. Probably a bad thing. The stats didn’t lie again and J. Manson won the next game levelling the match, and shifting momentum back in his favour, which turned out to be the final curtain for small Manson. J. Manson proceeded into his 8th Final.

Bournat had already resigned his fate before he stepped up to the plate. This match was a replay of last seasons white wash final, and Bournat was doing that thing he does where he half lifts his palm up and keeps saying “great”.

A. Bournat won the tossed but resigned to the fact that he was already snookered. His pool game wasn’t up there as he relied on his Darting strength to get by, although Davies held the clear upper hand in that department also. Bournat had to select darts first, but Davies cut straight into him with the 1-2 on darts then pool, leaving him one game away from the final. Bournat was crushed, there was still the Mahatma to play for in the bronze medal match, but if he wanted to touch the head of Ghandi he would have moved to India years ago. Davies was through to yet another final and the ultimate darts match hadn’t even begun.

Again, this was a usual matchup for Manson, although unlike his previous encounters this Belleggs, it was advantage opponent. As an interesting fact, A. Davies had won the Balleggs trophy more times that anyone else, whilst J. Manson held the same accolade with the close but no cigar trophy, so that’s nice isn’t it. Would it be the same story again, don’t bother reading on if you’re not interested, don’t worry I understand.

As it has been explained before, A. Davies had sex with a coin many years ago, which meant that he would obviously win the toss, and guess what, he did. Although there was a different tact being deployed this year by the 6-time champion… after some complaining from Manson, Davies announced he would be selecting pool first, the weaker of his two games. He tried to suggest that it was because it wanted to become the undisputed champion, but many suspected that it was due to his darts being in oddly horrible form after the scare of R. Jones hours before. But whatever the reason, Manson gladly agreed.

It was the correct decision for Davies, oddly the first pool match wasn’t even close which made Manson frown and look around as if to say “what the what”, this was his opportunity to do over Davies and he was blowing it. Davies followed it up with a win on the dart board, and then another win on the pool table which was a lot closer than the first. Manson was 3-0 down and had a mountain to climb to get back into this match. Davies was one win away from the crown.

It went over to darts, Manson got off to fast start with hitting the Schmiechal score of the day, and whilst Davies was still sodding around in the 200s, Manson was on his double. After a few attempts at double tops he manged to it. It was along way back, but a step in the right direction. 3-1, game on?

Manson had found some new momentum and was using this to his full advantage as he came out of the blocks quickly on the pool table also, getting down to the black with Davies having 4 balls still on the table. “Comeback starts now baby” was yelled as the black ball was rolled over a pocket by Manson. Davies then in return, possibly by using banned spells, managed to roll a yellow ball right over the black almost blocking it entirely. There was a gap, but a very small one, and if anyone loves a gap, it’s J. Manson. He took the shot on, a decision that still makes his stomach turn and fists clench to this day. FOR FUCK FUCKING SAKE FUCKING STUPID FUCK BOLLOCKS PANTS. Anyway Manson potted the black, but grazed Davies’ yellow on the way, giving Davies the match, Manson the Black Spoon again, and ultimately Davies his 7th Balleggs trophy.

Not too bad this year actually, it was agreed it quite possibly the fastest Balleggs ever. No sick, no fights, no injuries. Well done everyone, and to everyone, a good night.

M. Barber became the first person ever to get back to back Cordelia II All England Champion 1837 Awards. Very impressive.

For out performing himself in the Elliot, and for also scaring A. Davies in the opening round. R. Jones was awarded the Players Player.

For getting knocked out in the first round and then focusing all his efforts into coaching, as well as picking up his first Elliot, J. Bowden was awarded the Coaches Coach

Coach of the Year: J. Manson

Knob of the year: H. Cox-Hynd 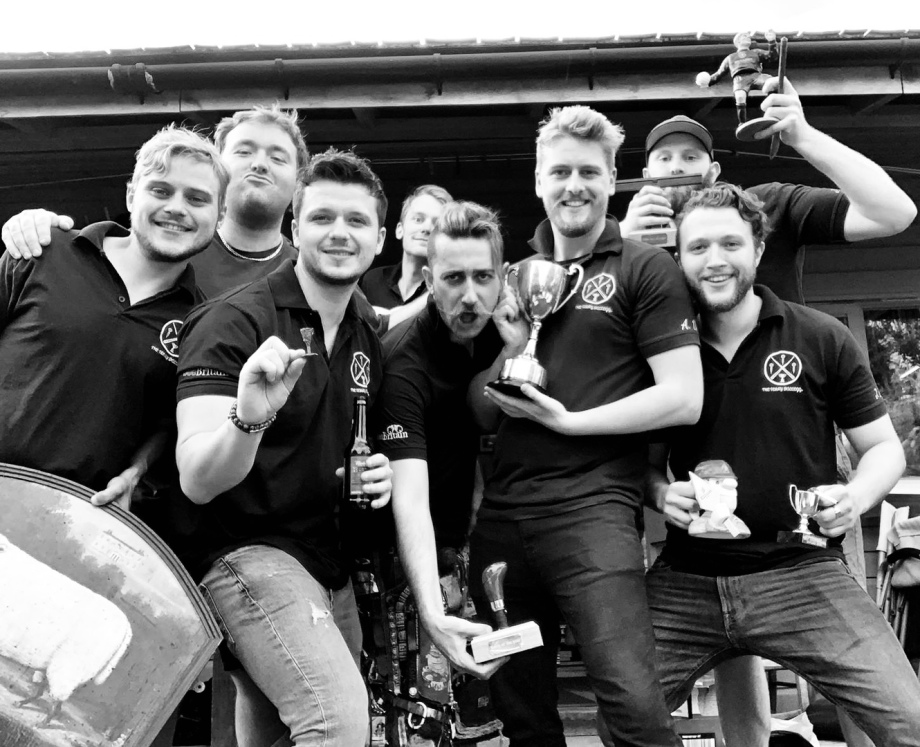