Why play the lottery when you could get your hands on these little beauties?

Won by winning, quite simple really

Close but no cigar

Won by coming second. The trophy contains a cigar left by the previous runner up, and must be replaced when smoked as a delicious distraction to coming so close and then failing to cut the mustard. 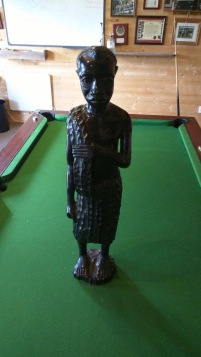 Won by coming third. A strange and rather heavy equivalent to a bronze medal (the worst of all the medals).

Won by winning the repechage. Get knocked out of the main tournament in the early stages, and you get another go, but not for the main trophy. Instead competitors challenge for this losers winner trophy of a life size bust of Elliot Balleggs. Essentially exactly the same as the Europa league. 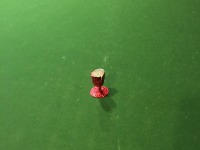 Erroneously titled, this trophy should actually be called the winners player award. The winner of the Balleggs each year selects a player that has stood out that tournament, for whatever reason, to win this award. There is currently a lot of on going debate between the players as to whether this trophy is very small, or actually just far away.

Coach of the year award

Won by coaching a player to victory. Upon semi-mandatory payment into the coach pot, players are randomly assigned another player to coach. If this coached player goes on to win, the coach wins the pot, and this award (which unfortunately cannot be wielded as it was accidentally bolted to the wall)

Won by being the most recent person to lose a pool game by potting the black. Winners of this trophy are rewarded by being forced to sing the ballegg national anthem in a sailors outfit at next seasons opening ceremony. No further comments.

Knob of the year

Won by coming last. To win this, you must lose, lose, lose, and then lose again. Quite a feat in itself really.

A coach can only work with the tools they're given, and when they're given a spanner, even the greatest of coaches will struggle. This award goes to the coach that really tried, but was let down by their useless spanner of a player, awarded by the Coach of the year. 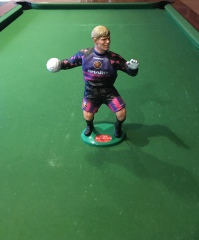 This is not actually the real Peter Scmeichel, it is believed to be just a figurine. It is awarded to the player who achieves the highest score with 3 darts, if tied, or if the highest score at the end of the tournament is 0, the winner is decided by who can get the hottest. This version of Schmeichel, real or not, is confirmed to have Terryballeggs.

When asked who else needed an award, the answer was clear. The top 5 always recieve recognition of some sort, as well as the lower echelons, but it's the lads finishing solidly in the 3rd quarter of the table, that turn up year after year, and never get their half efforts recognised. Until now! Introducing the Cordelia II All England Champion 1837 Award, which is a rather nice painting of a Ford Transit Van, awarded to a solid 7th place finisher.