What’s this we fucking have here then. Is it a Balleggs write up? Yes, right up, it bloody well is.

This is a tale of blood, sweat and fears. Of hard men, and soft, and some in between, colliding in grand crescendo of muck. It’s the story of the Balleggs, the same every year, and welcome back mether ferkerrrs. Strap yourselves in because you’re in for a boompy ride.

This summer solstice event saw a joint lowest turnout for a Balleggs due to some unfortunate scheduling conflicts, but it did see the arrival of its first new member in a long while, Ross Milne. Welcome in young man, to probably the third best club of your life.

Due to the small numbers, we jumped straight into the Quarter Finals, and as luck would have it, new man R. Milne got his first bye into the semis for at least a guaranteed 4th. Solid!

The first up to actually compete were two long time Ballegg stalwarts. Both were well known for causing major Ballegg upsets, but ultimate glory had evaded them both. Time for change, maybe… Darts was up first and Bournat opened his account nicely with first blood of the tournament, showcasing his new and ever improving darts game. Bowden, however, was quick to hit straight back with a win on pool. Ever the emotional player, Bowden used this momentum to propel himself to a surprising darts win against the head. That was it for Bournat, never liking the pool, Bowden cruised to another easy pool victory and through to the next round 3-1.

Barber vs Manson, a classic first round match up. These two have met 7 times in the past, more than any other, so that’s interesting isn’t it. And, as luck would have it, Manson had had the upper hand on all occasions, but Barber was looking to re-write his fate. Barber pleaded for pool first, he even flapped his hand in the general direction of the table and said “come’onnnnnn”. It wasn’t to be, darting opened the affair it was a Manson win. The Barber mission to mars had taken a major blow at the first hurdle, he’d have to win the next pool and then hope for the best. Manson didn’t let it happen, it was pool win, followed by a final darts win to usher Barber off for his 8th defeat to Manson, that first win was going to have to wait until next time. Sorry lad.

The main event of the opening rounds was upon us, the match that they’d all be waiting for. When two past winners collide so early in the event is always gathers a crowd, and this was no exception. A huge mob of five bystanders had amassed at the door to watch what would happen next. It should have been some match, but hey, the Titanic shouldn’t have sunk. All aboard bitches. Jones won the toss and steered away from Phillips’ strength on the pool table. A plan that worked nicely as Jones won the first darts game. Already a better run for him that last year. Phillips had to strike back with pool, he'd done it before, but this time he was holding back tears. He could see his dreams slipping away already. Jones kept his momentum going and won the pool, which was a bridge too far for Phillips who bowed out to a 3-0 very surprising white wash. Shocker.

Another classic match up for Manson, it was like a trip down memory lane for him. They’d met 6 times in the past, with Bowden getting the upper hand only once. Manson was brimming with confidence.

Darts first, Manson’s choice, and he was looking forward to the final already. Bowden, ever the mercurial player who was capable of pulling out world class performances, was determined to make a stand. And stand he did, it was the perfect start for Bowden, as he won the darts as a glimmer of panic flashed across Manson’s face. This panic turned into full time crisis mode as Bowden followed this up with a pool win, he was 2-0 up, and cruising. Manson was looking to become the first shock defeat of this Balleggs.

Manson strapped on his Balleggs pants, it was now or never. He whacked straight back out at Bowden with a darts and pool win, taking it back level to 2-2. He had the momentum now, and the next darts game went Mansons way as well. Bowden was staring down the barrel of another exit, but he wasn’t ready to go yet. Bowden was in his actual competing mode and he was still going, he won the pool, taking it to 3-3. Whoever won the last darts match was through to the final. Some match.

Manson was edging in front of Bowden, lucky man. He was back darting again and he reached the doubles first, and finally hit home with a match winning dart. Bowden wasn’t too upset, he’d had a bloody good go at it, no shame sir, and god speed.

It was the first time new-guy Milne picked up a cue in anger, and nobody, perhaps including even himself, had any idea what was going to happen. He was fresh off the boat from the Club Championships of some other sport which isn’t important, and he’d had a few, fair play. Although, not the wisest of moves.

Pool was the first order of the day, and Jones was hesitantly eying the untested Milne. Jones went about doing what he does semi-regularly (but not always), and won the pool, followed almost immediately by the darts. Milne was against the ropes, he’d been hit with a one-two and was starting to realise the severity of the situation. Welcome to the balleggs motherfucker.

Milne however, was quick to steel himself. He was determined to not bow out of his first Balleggs without a fight. It was back over to the pool table and Jones was licking his lips, his sights were now firmly set on the final. Milne racked them and broke them, and perhaps in a moment of sobriety, kept potting them to the dismay of Jones. Milne followed the up with the black in not too long after and managed to claw a game back to take it to 2-1, proving he can play. To everyone’s shock he then followed this up with a darts win, making it 2-2. It was going to be another tight semi, mmmm.

Back to the pool table now and both competitors knew to get the upper hand here would be a foot in the door to progression. It was a cagey affair but Jones managed to take the win. He then went on to turn it up a gear and give a fairly dominant display on the dartboard, claiming the Schmichal in the process. Jones was through, Milne was out, but a good show old boy, good show.

Jones was no stranger to glory, although you’d perhaps describe him as an acquaintance. He’d met the trophy once before in 2016, and he was looking to meet again. Manson, on the other hand was looking for his 6th Balleggs, and in the absence of he who shall not be named (Lord Davies-Voldemort), this was his best chance to do it.

Both were fairly evenly matched on game win percentages on the two disciplines, it was on a knife edge. Manson opened his account with a darts win, which was soon followed by a pool win, and he nodded in satisfaction of the perfect start to his title defence. Jones was seeing his dreams slip through his fingers, and there was nothing he could do other than fag and moan. Which usually does help to be honest.

Manson secured another darts victory on the back on the first two, taking it to 3-0. A long way back for Jones from here, but like a pig trapped in an alley, he wasn’t going to go down without some sort of resistance. He hit back with quick double jab on the pool, then darts. It was back to 3-2, and it was game on.

A further Manson pool win (aided rather nicely by Jones potting the black out of turn), followed by a Jones darts, took it up to 4-3. Very edgey, they were edging each other nicely. It could all come down to this pool game, if Manson wins, he takes home the trophy, Jones needed this to take it to a deciding darts. It was, however, too much of a task for Jones. Perhaps it was the booze catching up on him, or maybe just Manson’s disturbingly good looks, but he bowed to defeat. Jones conceded in his usual manor of laying of the floor for 5-10 minutes, before eventually shaking hands.

Manson had won it. His sixth victory. Was there any stopping him? Probably not.

The tournament ended, surprisingly. It was dark, people were medium drunk and most just wanted to go home. But it was by most accounts, a success, no one was hurt. Good.

Until next time – farewell mon amis.

M. Barber collected a rather impressive haul of 3 awards, including a rather ridiculous 4th Cordelia II All England Champion 1837 Award from only 7 competitions where it’s been played for. This also included a coaches coach award for services unknown.

For collecting an impressive 4th place for his first ever Balleggs, R. Milne was awarded the players player. In keeping with the Balleggs mantra of everyone gets a prize.

Coach of the Year: J. Bowden

Knob of the year: M. Barber 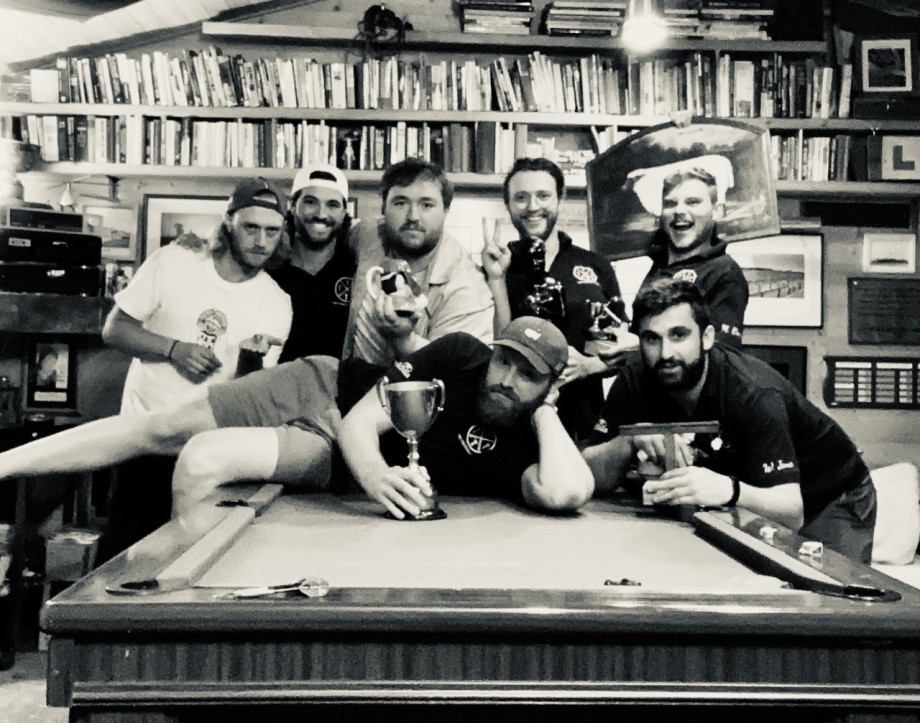